To pray for the world at large overwhelms me. There are so many needs! War, divisions, famine, disease…floods, earthquakes, wildfires, hurricanes…decadence, deceit, depravity of the mind, body and soul… My own soul is almost overcome with despair at the enormity of the sheer desperation in so many places and people.

How did Jesus stand it? How could God-become-man stand to look at the world he had originally created to be a garden paradise, but had turned into a wasteland of sin? How could Jesus walk among the diseased and afflicted, the greedy and lustful, knowing  humanity was never intended to be like that?

But he would withdraw to desolate places and pray. -Luke 5:16

Jesus knew nothing else but to pray. It is the only response to such overwhelming need. It is because we can’t possibly meet the need ourselves that we must turn to the One who can. We must bring the cares and concerns of our world to the One who created. It is his responsibility to heal, to provide, to redeem, and to restore.We bring the needs to God because only he can make all things well.

Is that all? Are we done then? No. No more than Jesus was.

To be a Christian means to be a “little Christ.” It is to be as Jesus was, to act as Jesus did. Jesus Himself said as much. After He had washed the feet of His disciples–the most humbling of acts!–He said, “For I have given you an example, that you also should do just as I have done to you.” (John 13:15) Jesus went away to pray, to offer to the Father what He was experiencing in His everyday life, and to hear from the Father what He was to do about it. He did whatever the Father told Him to do, and only what the Father told Him to do.

And that brings me back to the questions asked previously… How could Jesus do anything other than succumb to despair?

Jesus, knowing that the Father had given all things into his hands, and that he had come from God and was going back to God… -John 13:3

Jesus knew where He had come from, and He knew He would return there. Pure and simple. That blessed assurance provided for Jesus what He needed to accomplish all the Father gave Him to do.

That same blessed assurance is ours, simply for the asking and the believing. With that in mind, we too can withdraw to pray, to bring all the overwhelming needs of our world and lay them before God. We can unburden ourselves so that we can sit quietly with God and listen for what he has for us to do. And just like Jesus, we are strengthened by the promise that we will indeed one day return to the God from whom we came. In the meantime, we pray, we listen, and we respond in faith-filled obedience. We become Little Christs. 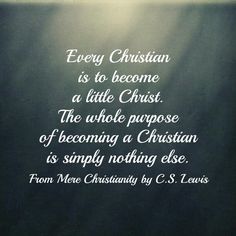